The pea is giving an overview about plant research. The brochure is covering methodical basics ind plant research and explains why genetic engineering methods are needed in the lab and green house to gain knowledge about genes and their functions. 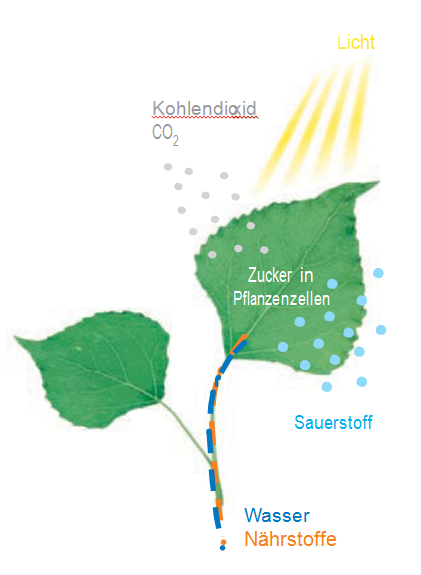 With the help of the green leaf pigment, plants can use the energy of sunlight to generate sugar and ... [more]

With the help of the green leaf pigment, plants can use the energy of sunlight to generate sugar and oxygen from water and carbon dioxide.

With the help of the green leaf pigment, plants can use the energy of sunlight to generate sugar and oxygen from water and carbon dioxide.

Why are plants important?

Plants: the foundation of life on earth

Plants are able to form energy-rich compounds using solar energy, carbon dioxide from the air, as well as water and the nutrients that are dissolved in it.

This process, by which oxygen is released into the atmosphere, takes place in the green parts of plants and is known as photosynthesis. Plants use photosynthesis and the subsequent metabolic pathways to build compounds like sugar, amino acids, vitamins, fats, starch and fibers. A world without plants would be a world lacking an essential source of food for both humans and animals.

Animal and human life on earth was only made possible through the combined action of plants together with bacteria in releasing oxygen. Plants form a range of different habitats and, in this way, provide ideal conditions for biodiversity.

Plants are the dominant lifeform on earth.

Why do we need plant research?

Understanding plants and exploiting their potential

Plants serve first and foremost as food. However, they are also used for the production of medicines, and to impart flavor, scent and color. Further, they are used as building materials (e.g., wood), as well as sources of energy, raw materials for clothing (e.g., cotton wool) and for additional industrial products.

As plants are of such central significance for humans and the environment, it is important to investigate their development and how they function, their reactions to the environment, as well as their relationships with other organisms. The aim is to understand them.

A fundamental understanding of plant processes contributes significantly to:

Owing to the diversity of themes in plant research, scientists of different disciplines work together. The expertise of biochemists, plant physiologists, geneticists, biophysicists, agricultural scientists, ecologists, biotechnologists – and in recent times more and more that of bioinformaticians – is needed.

How has plant research developed?

From outward appearances to intrinsic value

Humans have cultivated plants ever since societies first became sedentary. Early civilizations introduced successful methods and techniques to plant cultivation, although these were initially not understood. Up to the modern era, plant research mainly consisted of the description and cataloguing of plants. Only from the 17th century onwards did developments and discoveries in chemistry and physics enable more precise investigation of plant processes. Knowledge of physical principles was transferred to processes in plants. The discovery and verification of chemical elements opened the field of analytical chemistry. For the first time, the constituents of plants, such as tartaric or citric acid, could be determined. Hypotheses regarding resorption, the conversion of materials and exocytosis in plants led step-by-step to the discovery of photosynthesis. Microscopy allowed a look into the interior of plants and enabled observation of the form, position and structure of tissues, the differentiation of individual cells, as well as a description of their development and different elements.

Intensive research activity in the areas of the material composition of plants, cell and tissue analysis, as well as mechanisms of reproduction, led in the middle of the 19th century to the emergence of two new branches of research:

the study of heredity (which came to be known as genetics), and research into evolution. In 1858, Charles Darwin and Alfred Russel Wallace formulated their hypothesis on the theory of the natural selection of traits, which was then published in 1859. All modern theories of evolution are guided by this theory. In 1866, the Augustinian friar Gregor Mendel formulated the rules of heredity. These were based on his observations of crossbreeding experiments with peas.

Mendel’s rules of heredity, which were partially based on the externally visible trait of flower color, were only rediscovered and confirmed at the beginning of the 20th century through the research of H. de Vries, C. Correns and E. von Tschermak-Segenegg. Their research opened the way to more effective plant breeding.

Independently of Mendel, in 1869, Friedrich Miescher discovered and isolated the substance of which the genetic material is composed. He called this substance nuclein, as he found it in the nucleus of cells (from the Latin “nucleus” meaning core). Further research into nuclein, later termed deoxyribonucleic acid (abbreviated as DNA), Led, in 1953, to the elucidation of its structure by James Watson and Francis Crick, and laid the foundation for a completely new kind of plant research.

What are characteristics based on?

ACGT, the alphabet of life

The realization that DNA constitutes the genetic material made it the key element in scientific research – not only in plants. DNA determines the appearance of plants and carries the information for all processes, such as growth, development, material composition, or the response to environmental stimuli. Life was suddenly spelled out as A, C, G, T – after the bases adenine, cytosine, guanine, and thymine. The order of the letters (sequence) provides the “operating instructions” for all processes in the cell. Specific sections of sequence are known as genes. Genes are responsible for the expression of traits (e.g., flower color).

What are the fundamentals of modern plant research?

From intrinsic value to outward appearances

The realization that the operating instructions codified in DNA are of central importance for all processes inside the plant placed it at the center of scientific research. New techniques were developed that enabled the isolation and copying of DNA and which allowed researchers to reveal the sequence of the A, C, G, and T bases.  Scientists succeeded in sequencing the entire genome of the model plant thale cress, or Arabidopis thaliana in Latin, in the year 2000. The word “genome”, which originated in the 1970s, is a combination of the terms gene and chromosome and denotes the entire genetic material of an organism. 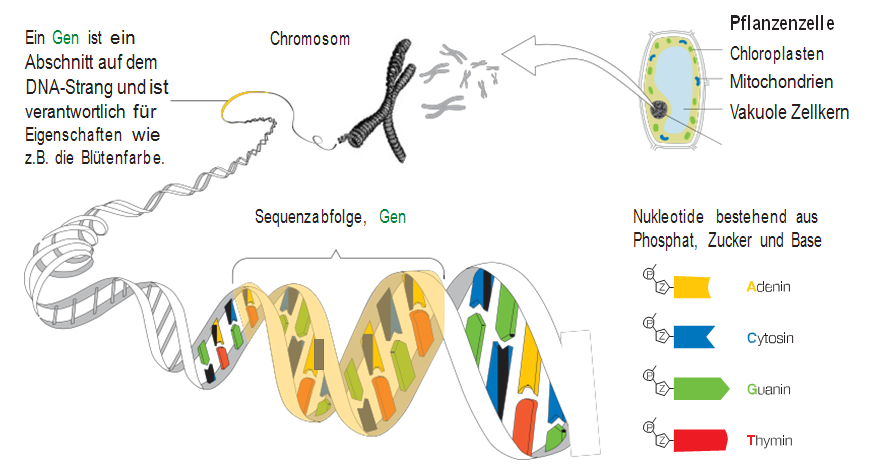 Rice, one of the most important food crops worldwide, was the next to be sequenced. The DNA sequences of a whole host of further cultivated plants, like the potato and rapeseed, are now also available. Environmental stimuli and developmental status influence the expression of the traits and properties of an organism. The growing understanding of how a gene is constructed, what the functional units are, and how it is “read” and converted (transcription) into the “protagonists”, the proteins, or how these processes are inhibited or prevented, enables new findings regarding how plants respond to stimuli.

In this way, not only did base sequences and the functional definition of genes become the focus of research, but also, the investigation of the ribonucleic acids (RNA), the regulation of proteins and the measurement of metabolic products (metabolites).

What is meant by genetic engineering and what role does it play in plant research?

Words aid in the understanding of foreign languages

Genetic engineering includes all those methods that are concerned with the isolation, characterization, propagation, alteration, and recombination of genetic material. The foundation for these methods was laid by phage and bacterial research that was carried out from the 1930s to the 1960s. Figuratively speaking, genetic engineering describes a method which enables the available vocabulary (the genetic material) to be expanded (through the addition of genes), forgotten words to be activated (through the switching on of genes) and other words to be eliminated from the active vocabulary (through switching off genes). This is possible because the genetic code is universal, that is, the genetic information of all organisms speaks the same language and uses the same letters: A, C, G, T.

Methods of genetic engineering and molecular biology are used as tools in all fields of research worldwide in order to try to understand the secrets of plants. By transferring a new gene into a plant or by switching individual genes on or off, the function of a particular gene can be determined. In this way, for example, a gene that is assumed to confer drought tolerance can be isolated from a drought-tolerant plant and introduced into an experimental plant.

If this plant now exhibits drought resistance in comparison to a control plant, then this proves that the investigated gene does indeed confer the ability to manage with only small quantities of water. In the past years, methods of genetic engineering have become increasingly sophisticated and refined. Today, it is possible to generate very precise changes (mutations) in the genetic material, similar to those that occur in nature. The new techniques are, owing to their high precision, collectively termed “Genome Editing”. (Ask the Grape, Part 2 - coming soon).

Why are mathematics and informatics needed in plant research?

Nowadays, it is no longer just individual genes that are investigated: new technologies enable the investigation of different types of RNA, of reading and translation processes (transcription, translation (Ask the Grape, Part 1), proteins, or the various components that make up a plant. For these different fields, the terms genomics, transcriptomics, proteomics, and metabolomics have been coined. The suffix -omics signals that the respective component is being analyzed in its entirety. Furthermore, enzyme activities and individual cells are also investigated with the most modern laser and microscopy techniques. Many of the steps in the analysis have not only been improved but now also automated, e.g., through pipetting robots, enabling ever-increasing amounts of data to be generated in ever-shorter timeframes. These data are saved in large databases. The data are evaluated with the use of different statistical methods and are used to construct mathematical models of different processes, an approach that requires mathematicians, informaticians and physicists to work closely with biologists. The aim of such an approach is, among others, to enable predictions regarding the response of plants to changing environmental conditions such as rising temperatures or increasing atmospheric concentrations of CO2. The accuracy of the prediction is then tested in experiments and can be applied to other plants or conditions. This holistic approach is known as systems biology.

Why are experimental releases carried out?

An experimental release is the cultivation of genetically modified (GM) plants in the field. Such releases are carried out to verify under natural conditions results that have been achieved in greenhouses. In the field, factors which cannot be adequately simulated in the greenhouse, such as aridity, solar radiation, disease conditions or pest infestation, exert their effects. The interactions between plants and the environment can only be definitively clarified under field conditions.