What we can learn from survivalists

How research on specialists can help our crops

At locations with extreme environmental conditions, the motto for organisms is: adapt or perish. In the case of plants that are anchored in the soil by their roots or algae, inability or ability to develop adaptation mechanisms is decisive for life or death. Due to this high selection pressure, specialists develop who are able to colonise extreme areas and survive there. One representative of such "survival artists" is an inconspicuous alga called Chlorella ohadii, which was found in the Negev desert and lives there under extreme light conditions, temperature fluctuations and drought. Dr. Haim Trebes, scientist at the Max Planck Institute of Molecular Plant Physiology in the group of Prof. Dr. Mark Stitt together with other colleagues of the institute and from Jerusalem, Freiburg, Marburg and Gatersleben are investigating this fascinating alga. The latest research results published in "Nature Plants" show how the alga manages to counteract the destructive effects of high light intensity that would normally destroy the photosynthesis apparatus and kill the alga. 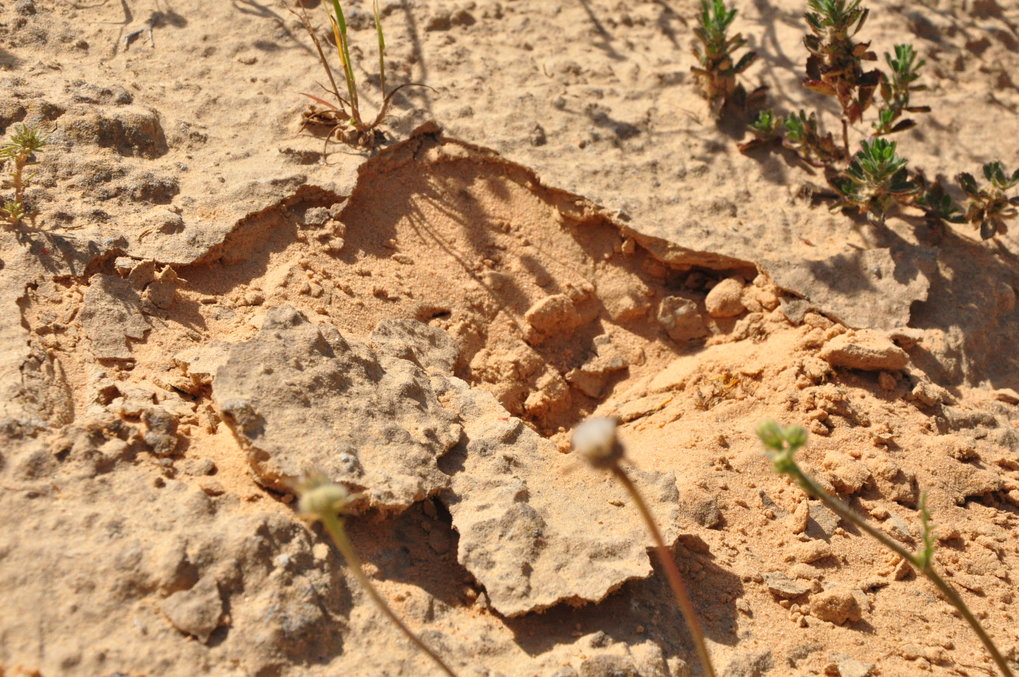 Desert biological sand crusts from Nizzana area in the harsh Negev desert from where the subject of this research has ... [more]

Desert biological sand crusts from Nizzana area in the harsh Negev desert from where the subject of this research has been isolated.

Desert biological sand crusts from Nizzana area in the harsh Negev desert from where the subject of this research has been isolated.

The surfaces of sandy deserts are among the most inhospitable and harsh environments in the world.  Not only is water scarce in these sand crusts, but temperatures range from sub-zero temperatures in winter to over 50 degrees Celsius on summer days, with daily fluctuations of more than 30 degrees. Dew formation early in the morning causes the surface to be transiently moistened. This moisture evaporates a short time later due to the rising temperatures, leaving the sand dry. The high daytime temperatures are associated with extremely high light intensities, over double those on a sunny summer day in Brandenburg, for example.

Despite these inhospitable conditions, there are life forms that have adapted to this difficult environment, the so-called "crust consortium". Its members take advantage of this short “window of opportunity” in the morning and photosynthesize from sunrise until the dew has evaporated. What they then experience is the drying out of their "growth substrate" as temperatures and light intensities rise. After the water is gone, the high light intensities cannot be used for photosynthesis. Instead the light energy leads to the formation of harmful reactive oxygen species (ROS).  Dr. Trebes explains: "You can compare this situation with an electrical surge. Imagine the photosynthesis apparatus as an electrical cable through which electricity is conducted from a source (sunlight) to a receptor (CO2). If the current source is too strong or there is not enough receptor capacity available, the cable is overloaded and a short circuit occurs". In plants or algae, this process is known as photoinhibition, a process in which the protein nucleus of the photosystem II is destroyed. Damage caused by a harmful amount of reactive oxygen species in combination with high temperatures and water loss also impacts negatively on many other processes in the cell, also known as abiotic stress. Photoinhibition and abiotic stress reduce global photosynthetic productivity and thus crop yield, especially in hot and dry climates. With progressive climate change and rising temperatures, such losses will become even greater in the future.

In contrast, the small green alga Chlorella ohadii has the ability to prevent such losses. Despite high light intensity, it can maintain its productivity and has the fastest growth rates ever measured for a photosynthetic cell under laboratory conditions.

As the scientists describe in their publication, the alga achieves its resistance by rapidly establishing an equilibrium of redox status, i.e. the establishment of an equilibrium of oxidative and reductive processes. This involve, a rapid post-translational redox-dependent activation of protein kinases, the activation of processes that counteract harmful reactive oxygen species (ROS) and heat shock reactions, and thylakoid remodelling. In summary, this means that the algae are able to protect their photosystem II from damage by regulating the transfer and uptake of electrons and at the same time initiate processes that use these electrons and counteract damage to important proteins. These processes are supported by restructuring of the thylakoids, i.e. changes in the organization of the membrane system in the chloroplasts in which the photosynthetic light reactions take place.

The scientists also found that C. ohadii already possesses a high photosynthetic capacity under low light conditions, allowing it to immediately reach high rates of photosynthesis after sudden exposure to very high light. This is particularly important because the alga occupies an ecological niche in which it has little time for photosynthesis, since it needs both water and light for this process, and it only receives these conditions in the early morning hours. On the other hand, it has the ability to react immediately to high light intensities, so that it can effectively protect its photosystem II from this high radiation exposure.

According to Dr. Trebes, the most important result of the work is that, due to its special properties, C. ohadii has what it takes to be used as a model organism for many research questions, for example in photosynthesis and stress research or in algal cell biology, and then he adds: "I am sure that C. ohadii can be used to improve our crops with regard to future climate changes. On a biotechnological level, C. ohadii is already being used as a gene source for developing crops with improved yields.”

The conclusion that can be drawn from research on C. ohadii or other species living under extreme conditions is that we can learn a great deal from such specialists and "extremists". Their adaptations to inhospitable regions have led them to develop new and special characteristics that may also be of great interest for our crop plants.