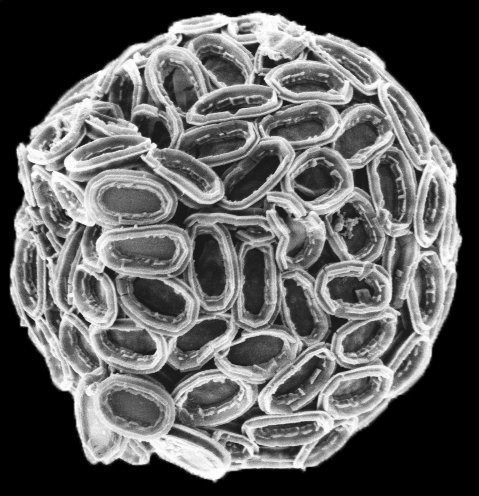 Sanja Sviben has been awarded with the Otto Hahn Medal from the Max Planck Society (MPG). She will receive the award during the annual meeting of the MPG, which takes place from June 13th-14th in Heidelberg. The society recognizes her outstanding doctoral thesis on the investigation of the mechanisms and the machinery underlying the biomineralization of calcium carbonate in coccolithophorid algae. 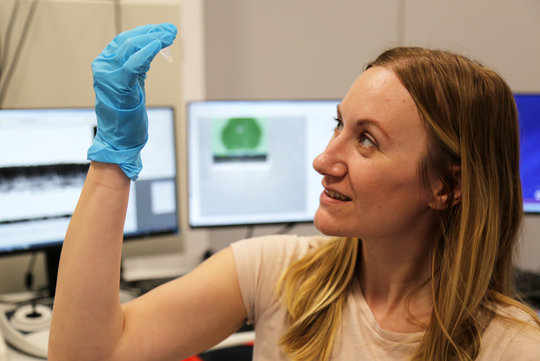 Coccolithophores are major marine calcifying organisms which have a strong influence on the global climate. Carbon dioxide (CO2) from the atmosphere is adsorbed by these algae and then transformed to carbonate partly. Coccolithophores use carbonate to produce complex-shaped mineral disks made of calcite called coccoliths. The coccoliths are formed inside the cell in a special vesicle, a membrane-enclosed space. The completed coccoliths are then transported out of the cell and are integrated in the coccolith armour that surrounds each algal cell. This is a very elegant way of binding CO2 which finally disappears as mineral disks on the seafloor.

During her PhD, Sanja studied the most abundant coccolithophore Emiliania huxleyi using a combination of cryo-electron microscopy, cryo-X-ray spectroscopy and spectromicroscopy, analytical electron microscopy and confocal laser scanning microscopy. She identified a so far unknown cellular compartment, which appears to be the main calcium storage bank in these cells and potentially an important player in the biomineralization pathway.

Sanja also performed the first 3D ultrastructural analysis of a coccolithophore during different stages of biomineralization process using the state-of-the-art cryo-FIB SEM technique. Her work also involved investigation of cellular machinery underlying coccolith formation where she had been developing a protocol for isolation of the coccolith vesicle of E. huxleyi. Proteomic characterization of the isolated material identified previously unreported candidates for proteins involved in coccolith formation.

"The doctoral work is a significant step towards deciphering the molecular and the mechanistic details of biomineralization in coccolithophores and offers fresh entry points into investigation of biology of these ecologically important organisms", says Sanja.  As coccolithophores have a great impact on global carbon cycle, these discoveries could help scientists understand and predict how coccolithophores will respond to ocean acidification.

Sanja Sviben did her PhD at the MPI of Molecular Plant Physiology under supervision of Dr. André Scheffel. The work was created in close collaboration with the Biomaterials department of Prof. Peter Fratzl at the MPI of Colloids and Interfaces, where she is currently a postdoctoral researcher.