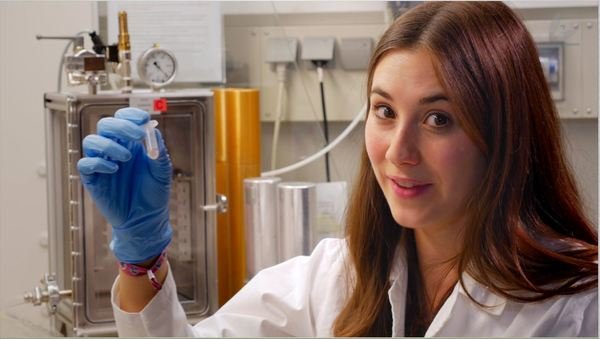 Mercedes is a PhD student from Spain and works at our institute. She is interested in photosynthesis. To better understand how plants carry out photosynthesis she has introduced into tobacco a gene that could improve photosynthesis. How she introduced the gene into the plant she shows in the film “From greenhouse to lab”.

From Greenhouse to the Lab

And then? Which are the next steps?

Next she has to look if the gene of interest has been successfully incorporated into the genome of the plant, if it is active and if the corresponding protein is synthesized. For this purpose, she first separates the various components (DNA, RNA, proteins) by gel electrophoresis according to their size.

After that she uses the so-called Southern, Northern and Western Blots to detect the DNA sequence, the corresponding messenger RNA and the encoded protein, respectively.

In this way she can determine whether the gene of interest is actually integrated into the plant genome, whether it is active and whether in fact the corresponding protein is formed. If so, she can go on and investigate what effect the introduced gene has on photosynthesis, if it improves the photosynthesis or rather the opposite is the case.

The terms Southern, Northern and Western blot have nothing to do with geographic directions.

The Southern blot was named after Edwin Southern, who developed this biomolecular method for analyzing DNA sequences in the 70s.

Mercedes is explaining the possibility to measure photosynthesis in the following "pimp your brain" movie.