Contribution to the Yearbook of the Max Planck Society 2018

The Max Planck Society (MPG) compiles an Annual Report every year. In addition to facts and figures on the MPG, each of the 86 Max Planck Institutes presents itself with a research result that has a particularly high scientific and, if applicable, social impact. In the report from 2018, Dr. Salma Balazadeh presented her research and results under the title “Plant Stress Control Networks”.

Highlights From the Annual Report 2018

Plants with Memory (Page 7)
From the submitted reports 15 contributions are selected, which are of particular interest from the point of view of science communication, especially for the non-specialist.

The research group of Dr. Salma Balazadeh aims to functionally characterise and identify the gene regulatory networks (GRNs) of transcription factors (TFs) involved in the adaptation of plant growth to environmental changes in the model plant Arabidopsis thaliana and transfer the knowledge obtained in Arabidopsis to crops such as tomato. The group also investigates the molecular machinery that underlies the memory and forgetfulness of stress by focusing on the role of autophagy for heat stress memory in Arabidopsis

Abiotic stress impairs the growth, development and productivity of plants, a response often associated with a reduction in shoot growth followed by accelerated senescence and lower yield. Plants have an inherent ability to tolerate certain levels of stress; this characteristic, called basal tolerance, varies between species and genotypes. In addition to this inherent ability to survive stress, plants have the ability to acquire tolerance to otherwise lethal stresses. Experimental evidence indicates the existence of a molecular ´memory´ that enables plants to withstand stress better if previously confronted with the same or a similar type of stress. However, the regulatory mechanisms by which plants integrate stress-derived signals into the growth and developmental programs and the molecular machinery that underlies stress memory in plants are so far largely unknown.

Research in our group currently focuses on the following two main areas:

1. Unravelling the regulatory networks of transcription factors controlling the adaptation of plant growth to environmental challenges
The response to environmental cues is a highly regulated process in plants that requires the coordinated regulation of gene expression. Defects in gene regulatory mechanisms can result in various cellular disorders and severe interference with developmental and physiological processes. Gene regulation is the task of transcription factors (TFs). Together with their target genes the TFs constitute gene regulatory networks (GRNs) that are central to almost all biological processes.
Several yet uncharacterized TFs from the NAC and HD-ZIP families are antagonistically regulated by growth- and stress-related hormones in Arabidopsis. Such transcription factors are potential important regulators of adaptive growth responses under conditions of abiotic stress. 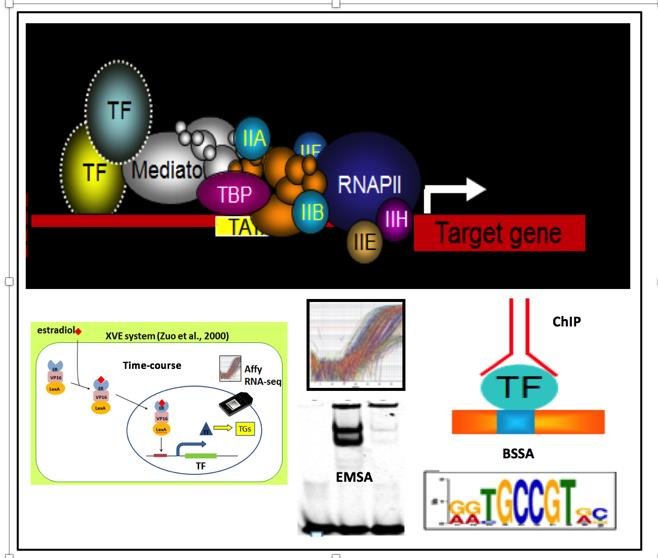 Our group uses a comprehensive set of technologies to functionally characterise such TFs and identify their GRN. One of the TFs extensively studied in the group is JUNGBRUNNEN1 (JUB1), a NAC factor from Arabidopsis thaliana. We discovered its role as a central regulator of longevity and the interplay between growth and stress responses (Wu et al., 2012; Shahnejat-Bushehri et al., 2016). We have shown that JUB1 forms the core of a robust regulatory module that triggers the accumulation of DELLA proteins, thereby restricting cell elongation while concomitantly enhancing stress tolerance. A major objective of the group now is to further investigate JUB1´s regulatory network by identifying its upstream regulators and interacting proteins.

2. Elucidating the role of autophagy for the regulation of heat stress memory
We investigate the molecular mechanisms of heat stress memory (thermomemory) in Arabidopsis and recently discovered a plastid-localised control module for thermomemory in this plant consisting of heat shock protein HSP21 and metalloprotease FtsH6. We found that sustained memory requires that HSP21 levels remain high and that HSP21 abundance is regulated by FtsH6. Lack of a functional FtsH6 protein promotes HSP21 accumulation during the later stages of thermomemory and increases thermomemory capacity (Sedaghatmehr et al., 2016). We are now trying to identify further molecular players of this memory control system.
Autophagy is an evolutionarily conserved, dynamic recycling process critical for the removal of damaged/old proteins and organelles, thereby maintaining cellular energy homeostasis. In plants, autophagy plays a role in various developmental processes (e.g., timing of senescence, bolting, and pollen germination) as well as in the response towards abiotic and biotic stresses. We aim at gaining a deeper understanding of the role of autophagy for thermomemory. To this end we plan to identify proteins targeted by selective autophagy and to detect and characterize TFs regulating the expression of AUTOPHAGY (ATG) genes during thermomemory.