Organisms from various prokaryotic and eukaryotic phyla are equipped with the ability to form inorganic materials (biomaterials). The inorganic materials produced by organisms usually exhibit shapes, structural organization and functionalities that are unknown from abiotically formed materials made of the same mineral type. The structural and morphological diversity of biomaterials made of the same mineral type demonstrates the capability of organisms to guide the growth of mineral crystals and to arrange crystals as well as amorphous mineral particles into well-defined larger structures. The synthetic fabrication of materials with structural complexities similar to that of many biomaterials is beyond the capabilities of current technology. Elucidating the biochemical mechanisms behind biomaterial formation and morphogenesis is therefore not only a fascinating biological project but is also of interest to more applied fields of research. For instance, mimicking of the biological mechanism in materials synthesis may help to fabricate novel materials that exhibit advanced structural and functional properties. The cellular machinery that enables organisms to produce a specific material morphology is so far only identified in parts and only for a small number of organisms.

The most abundant biomineral, in terms of quantity and number of producing species, is calcium carbonate (CaCO3). Among the most intriguing examples of biologically formed CaCO3 are the elaborately shaped scales, termed coccoliths, that are produced by unicellular algae denoted coccolithophores (Figure 1). Coccolithophores are the world's most significant producers of CaCO3 and important players in the marine ecosystem. 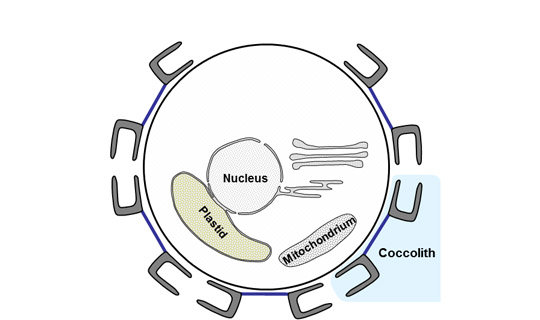 Coccolithophores are easy to grow in the laboratory and their, in comparison to multicellular CaCO3-formers, biological simplicity makes them attractive model organisms for exploring the genetic factors underlying the formation of complex CaCO3 structures. Surprisingly little is known about the cellular machinery that guides coccolith biogenesis and enables the cells to precisely control the morphology of heterococcolith calcite crystals.

By focusing on Emiliania huxleyi, the most prominent coccolithophore in the world’s oceans and the only sequenced coccolithophore so far, and Pleurochrysis carterae as model coccolithophores we employ biochemical and genomic/molecular biology approaches to identify the proteins involved in coccolith biogenesis and morphogenesis. To pave the way for functional in vivo analysis of the identified members of the coccolith-forming machinery we are developing transformation systems and genetic tools for both coccolithophores as these techniques are currently not established. Our projects involve a broad spectrum of methods in biochemistry (protein isolation and purification, identification, and characterization), molecular and cell biology (e.g. genetic transformation of algae, organelle isolation, flow cytometry, fluorescence and electron microscopy).